I went to Hamburg last Monday – to join the rest of the “Plejaden”-Crew. The party took place at the Hamburg Planetarium, a huge and impressive brickstone-building and the city park’s most famous landmark (once being a water tower, build in 1912). 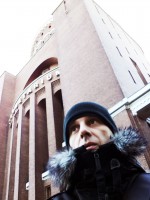 #
In the afternoon, when I took a first stroll in the park, the day was cold, the sun bright and the wind icy. After 7.pm the day was still cold, the wind still icy – but of course the sun was gone. Then I found out, that Hamburg has far to few burning lamp posts – dammit. I wasn’t prepared for that amount of darkness in the middle of a metropolis. And of course, a flashlight or a torch wasn’t on my must-have-list (as were no scandinavian sledge dogs). But I knew that the Planetarium was located at the western end of the park, and after a short walk through the dark woods I finally found it (easy to spot in daylight, almost impossible to find during the night – I mean, without a senior boy scout at your side).

The transition from dark woods to bright & cosy planetarium was a bit disturbing. When I entered the building, I was greeted and checked (like everyone else, no offense) by a cow in a custom made space suit (see picture). I wondered if they were running tests for agriculture on Mars, but it was obviously just a fashion statement (cows nowadays are very fashion sensitive, as I was told later). The humans in the lobby were gathering round a horseshoe shaped bar, drinking and talking (this is what humans generally do, so no surprise, thank god). 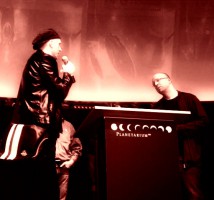 After a few minutes a bell rang and we were allowed to enter the magic hall – a circular place with a high ceiling and a projector in the middle, that looked like the distorted eye of a giant alien insect. The crew that worked on the series (the fist season of PERRY RHODAN) was introduced and when I was called onto the stage, I went (well, almost fell, as far as I remember – always watch your step in dark Hamburg) onto the tiny and crowded platform und spoke a bit about the problems of composing music in a tech-infested space setting (which PERRY RHODAN certainly is).
Then the lights went out and the sound was on – accompanied by floating stars, spaceships and asteroids. 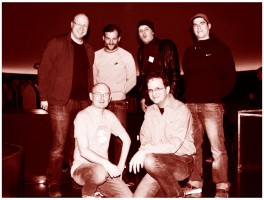 AFTERMATH
After the show someone took a photograph. The picture shows four humans, one alien and the senior boy scout, who led me to the planetarium (thanks, buddy). We were forced to these crooked smiles, cause the cow, temporarily freed from its space-suit, was licking salt from the photographer’s cheecks – a rather unpleasant sight, I speak for all of us.
Afterwards we gathered around the horseshoe shaped bar again und talked about production tech-stuff (which is of no interest for anyone, except total gearheads und tech-nerds. But it was fun).

BACK HOME
When I left the the planetarium at 11.p.m., the woods and the park were pitch-dark again. I found a tribe of Norwegian moose hunters gathering round a firepole and after a few discussions (and the exchange of some of my PERRY RHODAN promotional items, including a lighter, a mug and half a bottle of Rhodan-Rum) they led my safely home.